BRTC has launched mobile app called ‘Kata Dur’ to reassure the passengers and to eliminate all the hassles of public transport. The word ‘Kata Dura’ means How far. Country’s leading IT companies ‘Business Automation Limited’ and ‘Ideation Technologies Solutions’ are developed the mobile phone based app “Kata Dura”. 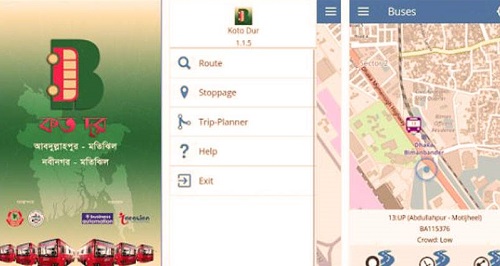 is for passengers of Dhaka Metropolitan area. With the help of this app, people can observe the position and the speed of different buses in a certain time. Whoever can be known the current speed or the estimated time (ETA) of the buses coming towards their current location or a bus stop. Initially, this service is available in BRTC AC buses bound for Dhaka’s Motijheel from Abdullahpur. In phases the app service will expand in the buses of other routes of Dhaka city.

Passengers will be able to see through the app, how many passengers have in the next bus, along with the possible time to get to the bus stop, and the passengers can also see the images of the traffic congestion. The app will also help you to get a seat on the bus or in front of any stops, the app will help passengers. As a result, if the passengers want, can also take the bus with the seat from the next or previous stop.

Apart from, through “Kata dur app” passengers can get an idea about the bus routes, traffic congestion’s, gathering of passengers in the bus stoppage and the time it will take to reach the destination.

Road transport and highways division secretary and BRTC chairman said in the opening ceremony the ‘Kata Dura’ App service, the journey of digitization has begun to bring discipline in Dhaka’s public transport system, it will be continued.To implementing the ‘Digital Bangladesh’ dreamed by the Honorable Prime Minister Sheikh Hasina, BRTC will be adding new technologies. In phases, in the next few days, this service will be available in BRTC bus of other routes .